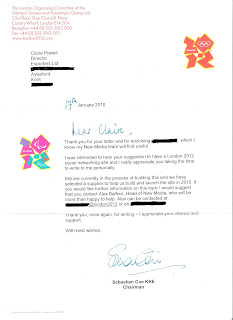 This week I stumbled across an announcement  in SportNext magazine about the launch of the social media platform for the Olympics 2012 - The Olympics Hub.

When I contacted Sir Sebastian Coe back in 2010 about investing in my sports networking site www.esporters dot com - he thanked me "for my suggestion" - it seems it has taken them over 2 years to launched this site. Back in January 2010 Seb Coe wrote that "we are currently in the process of building this and plan to launch in 2010".

From what I can see from playing around, "The Olympics Hub" is just a amalgamation of the tweets and FB updates from Olympians. If you are rising talent [not quite made its] you are not allowed. Equally no non Olympic sports are allowed to register and can not be found on the site search [i.e. squash]. The biggest stars get the biggest exposure, creating a virtuous circle.

My site was aimed at achieving more than just a summary of what is already being said by the top stars [who already have loads of publicity]. It was a way for talent / up-coming athletes to profile themselves and develop fans and a support network round them to help them achieve their sporting goals.

Although my site www.esporters dot com is no longer live, it is great to have a signed letter from the great man himself - Sebastian Coe. However I wish he had listened more carefully to my "suggestion" as he could have achieved so much more with a site which had more legacy value by helping "talent" create a support nework/fans and not just get the current stars more exposure during the Olympics, which lacks legacy.