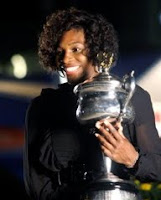 Let us dispel some myths firstly:
Womens sport does not lack talent
Women sporters do not train less hard than the men - they push their bodies to the limit too
Womens sport is not less interesting to watch - in fact in some sports it is more exciting to watch as the rallies are shorter.
Yes less women play sports than men, but this gap is decreasing and in the last Olympics the split was 50:50.

Women's sport suffers from lack of visibility. The media coverage ratio between male and female professional sports in the developed world is 10:1. The fan base is a lot smaller too, in fact world championships for some women's individual sports don't exceed more than 200 spectators. Men don't want to watch the women and women neither it appears. The sports spectator culture among women hasn’t kept pace with the participatory one.

Some believe the only way to increase the visibility of women's sport, is for women to compete in the mens competitions, but due to the physiology of men versus women, it would be impossible for women to compete at that level. If you compare the top 10 women tennis players they would find it hard to compete against men in the top 1000 rankings. In squash the top 10 women on the national arena, find it difficult beating men ranked 600 nationally. This is not a solution for those sports which require physical exertion.

Now if you compare one sport where the women get as much publicity and have just as many fans as the men, it is tennis. The game is easy to understand and follow for non-players of the sport. Remember understanding of the game is necessary to enjoy it and to want to follow it. During the breaks, the analysis helps to understand the game, the key moments and the decisive decisions, and ultimately builds up the excitement and enjoyment.

The tennis tour has a number of women "personalities" including the likes of Serena Williams who in fact has far more twitter followers than Roger Federa. Women in tennis has benefited from part of the women's ATP tournaments being played at the same time as the men's. So the media and the fans are already there, so they get the visibility. Equally tennis benefits from a lot of women role models, including the likes of Sue Barker the tennis commentator.

Another example of women getting a lot of visibility in their sport, is when they compete at the Olympics. In part this can be explained by the fact that they compete at the same venues and times as the men and therefore the press and fans/audience are already present. Patriotism plays a role here too, we will all cheer for a women from our country if it means another gold medal for the medal table.

Technology and scoring/rule systems have a huge role to play in increasing the interest in following certain sports, look at what the rule changes did for the game of rugby and the use of technology to help analyze football games at half time and checking refereeing decisions in tennis. However for some sports, like squash even changing the scoring for the women's game to match the mens scoring system has not managed to increase the fan base of the women's game.

The huge gap between opportunities, funding and media exposure given to males and females in the sporting world persists. However major inroads have been made in pay equity for international sporting competitions. In tennis, the French Open and Wimbledon joined ranks with the Australian and US Opens by offering both men and women competitors equal prize money. Also, the 2005 Standard Chartered Singapore Marathon paid winners of men's and women's categories equal prize money. But these sports are in the minority. For instance, according to the US National Committee on Pay Equity, the average salary in the Women's National Basketball Association (WNBA) is only 2 per cent of the all-male National Basketball Association's (NBA) average.

There are many lessons to be learned from tennis, in the stride to increase the visibility of the womens sports: